Lega Serie A Lands in the US, De Siervo Launches ‘Calcio is Back’ in New York

LeddarTech Brings Raw Data Fusion and Perception Technology to Automotive ADAS and AD Events in China and the U.S.

Opening event at the Metropolitan Museum of Art, attended by Vieri, Del Piero, Pirlo and Nesta

LEGA SERIE A LANDS IN THE US, DE SIERVO LAUNCHES ‘CALCIO IS BACK’ IN NEW YORK 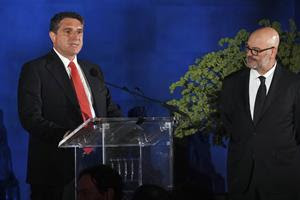 Charlie Stillitano, right, Managing Director for U.S. Lega Serie A, listens as Luigi De Siervo, left, CEO of Lega Serie A, speaks during the ‘Calcio Is Back’ gala dinner to kick-off Italy’s Lega Serie A soccer arrival to the U.S., Tuesday, May 24, 2022, at the Met in New York. (AP Photo/Bebeto Matthews)

NEW YORK, May 25, 2022 (GLOBE NEWSWIRE) — The Lega Serie A lands in the United States. And it does so in grand style, launching a new ‘historic phase’ for Italian football, with the inaugural event ‘Calcio is Back’ at the Metropolitan Museum of Art in New York, a prestigious venue for world-famous brands. Many personalities from the institutional, entrepreneurial, cultural, sporting and entertainment worlds attended the event, including all the Lega Serie A clubs and legends such as Alessandro Del Piero, Alessandro Nesta, Andrea Pirlo and Christian Vieri, ‘Ambassadors of Lega Serie A’, as well as NBA and NFL champions. “It’s a project that started more than two years ago: we strongly believe in it and it’s finally happening, 20 years later than it should have,” explained Luigi De Siervo, CEO of Lega Serie A, at a press conference in New York to present the project.

“Those who came before us had only focused on Italy, which is fundamental in terms of turnover;” now is the time to do what should have been started two decades ago, with “the beginning of globalisation. Until now,” De Siervo explained, “the Serie A had focused on other priorities.”

The operational and institutional centre of the project ‘Calcio is Back’ in the US will be the recently opened office of the Lega Serie A in New York, in Chelsea Manhattan, 133W 25th street. The opening of the first international office marks the start of a project that will allow the Lega and its 20 member clubs to create new synergies while strengthening the relations with institutions, broadcasters, brands and fans overseas.

The opening of the Lega’s New York office, De Siervo continued, is aimed at “progressively growing” the Serie A product, at “making up for lost time and reaching everyone in the United States who watches football.” De Siervo then expressed his “enthusiasm” for the relationship with CBS, the Lega Serie A’s main broadcaster in the United States. “We are actively working to put them in a position to increase their audience.”

The investment for the launch in the US is currently quantified at between €1 million and €3 million, “but it can still be increased,” says De Siervo, anticipating that “two more hubs such as the one in New York” will be opened and that the aim “is to have a series of offices around the world within a year and a half.”

A photo accompanying this announcement is available at https://www.globenewswire.com/NewsRoom/AttachmentNg/3ef91ba0-d8b9-4084-934b-f4b72e083d79

The photo is also available at Newscom, www.newscom.com, and via AP PhotoExpress.